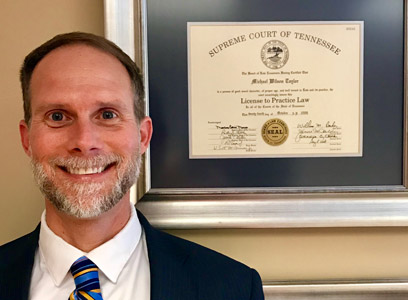 Michael Wilson Taylor grew up in Hartsville, Tennessee, where he attended Trousdale County High School. During those formative years, and for most of the following summers, he spent a great deal of time on his family’s tobacco farm, gaining invaluable experience and a genuine appreciation for a hard day’s work.

Soon after beginning his studies at The University of Tennessee, Knoxville, in the fall of 1994, as a history major and an active member of Sigma Nu Fraternity, Michael worked with various organizations in improving the lives of many unfortunate citizens in the Knox County area, thereby attaining a greater perspective of the problems and goals most people share.

After graduating from UT, Michael began his pursuit of a law degree at Nashville School of Law, during which time he also served as a clerk for a firm in his hometown of Hartsville. In the winter of 2006, having passed the bar exam on his first attempt, he established a private legal practice in Lafayette, Tennessee. From there, Michael provided court appointed and retained legal counsel in general sessions, juvenile, circuit and chancery courts of Macon and surrounding counties, in the capacities of guardian ad litem, conservator, and criminal defense advocate in a multitude of cases, while also facilitating divorce resolution, various property disputes, and other civil litigation.

In the summer of 2008, Michael began working as an assistant public defender for the Fifteenth Judicial District of Tennessee. As a champion of the underprivileged, Michael provided legal counsel to people of limited means, and he served as a strong and compassionate voice for many who could not speak for themselves.

Having returned to private practice in Gallatin, Tennessee, in March, 2016, Michael’s primary objective is to continue to zealously and ethically protect and advance his clients’ interests, while working diligently to achieve optimal results.